Early in March, operating in line with international communist solidarity the CPRF branches in Moscow and Kaliningrad picketed local Polish diplomatic missions in support of the Communist Party of Poland.

Orators stressed that political bullying, initiated by the Polish authorities along with demolition of Soviet monuments for liberators of Poland, in combination with anti-Communism and anti – Russian sentiment backed with official statements, finally had resulted in a policy of severe repressions against opposition and CPP in particular. 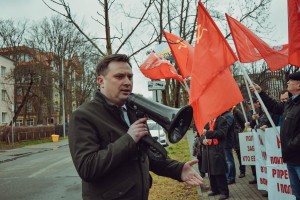 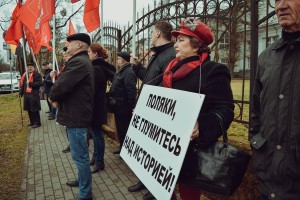 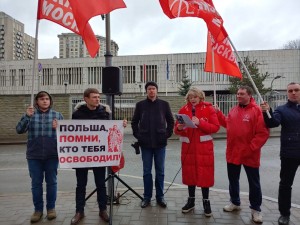 These policies inevitably leads to reappearance of neo-Nazism in Poland which has lost thousands of citizens tortured and burned alive in gas chambers of fascist concentration camps.

Being faithful to socialism and historic justice Polish communists stand firm opposing that policy. They tell the truth and that is why they are dangerous. The historic truth is what the Polish authority is scared with most of all!

Standing shoulder to shoulder with Polish communists the CPRF calls on all communist parties to express support to the CPP in its struggle for the truth, justice and socialism.

The same meeting was held in Kaliningrad headed by Maxim Bulanov, the First Secretary of the Regional branch. While the meeting, he notes that the Polish authorities still have been pursuing an unacceptable policy of equating communism to Nazism.

He has reminded the gigantic price paid by the Red Army for the liberation of Poland. More than 600 thousand soldiers and officers sacrificed their lives for those who have been now demolishing their memorials stepping over their memory. Such behavior in respect to memory of victims is unacceptable!

The joint statement of participants at the meetings was:

Stop political persecution of the CPP.
NO to Fascism!