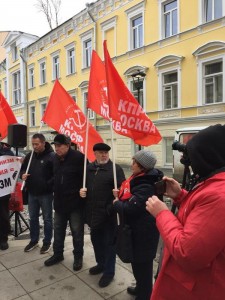 The demanded of immediate stop of such pro-fascist policy had united the rally led by Denis Parfenov, State Duma Parliamentarian, Tatyana Desyatova, Coordinator of the CPRF Inter Brigade, all Moscow communists and workers who came to a diplomatic mission with red colors in order to express their attitude towards Latvian policies of justification and glorification of Nazi ex-servants.

Speakers emphasized the utmost danger of officially supported policy of war against Soviet monuments, sustained along with Latvian SS veterans’ marches and their collaborators in Riga. 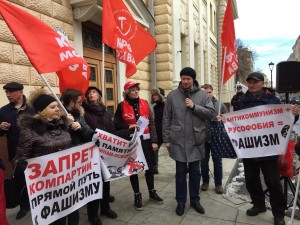 Therefore, these irresponsible policies and practices must be universally and unequivocally rejected as finally leading to reappearance of neo-Nazism in Latvia.

Standing side-by-side with anti-fascist forces all over the world, the CPRF calls upon all communist parties to condemn pro-fascist policy of the Latvian authority and prevent resurrection of Nazi ideology in Europe.

We will never allow to distort our Soviet history. We will never let them erase our victorious socialist deeds!

The participants of the meeting issued a joint statement:
NO insult to the memory of Soviet soldiers who saved the world from Fascism!
NO to Fascism in Baltic countries!