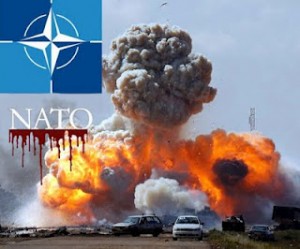 All these steps point at rapid preparations for direct intervention against a sovereign state that is a UN member. The United States resort to these actions, as attempts to overthrow Bashar al-Assad effectuated by mercenaries for more than two years turn to be futile. Resilient Syrian people and its allies prevent this blitzkrieg attack from success. At the end of the day, the U.S. are entangled into an incessant conflict brought about by their own secret service agencies.

Every day it’s getting more evident that expectations with regard to deposing the legitimate Syrian regime by mercenaries alone are illusive. Syrian army has shown consistent loyalty to the government, successfully smashing terrorist forces. The so-called “Free Syrian Army” has come apart, burglarizing and abusing civil population, eventually ceasing to be a single fighting force. Even Martin Dempsey, chairman of the Joint Chiefs of Staff, had to admit it, stating that Syria lacks “viable opposition”.

Throughout the escalation of the Syrian conflict USA and allies have proven exceedingly hypocritical. The U.S. express feigned concern with regard to the breaches of international law, while casting aside the order established after World War II through aggressive policy reinforcing law of might. Sham concern for civil casualties neighbours relentless U.S. attempts to oust Assad government, even if it takes more blood to spill. USA constantly warns that international terrorism has become the main threat to security. On the other hand, this country is quiet cognizant of its own immoral cooperation with al-Qaeda and Jabhat al-Nusra that it considers as terrorist organizations.

Today no one doubts that the U.S. are not planning to contribute to stabilization in Syria. Washington will benefit from wreaking the havoc there, as in the long term it stands for redrawing the world map, which involves creation of the Greater Middle East region where the U.S. plan to exert control. Should their plans come true, it will as well put Russia at risk, since Russia might be next in line after Syria.

The congressional decision is not a peace-building measure, but an attempt to turn the tide in Syria and to live up to expectations of the American taxpayers that wonder into another adventuristic scheme plotted by the CIA, the Pentagon and neocons, the masterminds of it all, that eventually draw up foreign policy of the U.S. For this reason even economic recession and following expenditure cuts don’t stop Americans from preparations for military action against Syria.

At the same time this step virtually disrupts activities of the international peace conference on Syria, that was negotiated between Russian and American leadership. Thus, on the one hand, America suggests peace-building measures, on the other hand it offers rebels comprehensive aid up to direct military intervention aimed at the deposition of the legitimate Syrian government.

Oddly enough, this kind of Washington’s policy has real ground, as those who rule the American state can be found not in the White house, but behind highly powerful transnational corporations aspiring to global dominance.

The Communist Party of the Russian Federation relates to the calls by Russian Ministry of Foreign Affairs for political solution in Syria. However, we believe that Russian leadership should take a tougher line of principle and show more active reaction to unquestionably subversive U.S. activities. We are convinced that Russia should carry on with and enhance its political and diplomatic aid to Syria, as well as extend its defensive weapons supply to the country. Pursuant to the 1980 Treaty of friendship and cooperation between the USSR and Syria that is still in force Russia is entitled to take necessary steps in order to protect Syrian integrity and sovereignty.

As Syria remains one of the few Russian allies in the region of strategic importance, this fact should take precedence when making relevant decisions. We have to express solidarity with just fight of the Syrian people against neocolonization forces.