April 22, 2021 is considered as a date of great importance for all Russian and international communists around the world as it marks the 151st Anniversary of V. Lenin’s birth.

The CPRF traditionally is used to widely celebrate this famous date.

CPRF members and parliamentarians, Komsomol and Party allies marched through the Red Square to lay wreaths and flowers at the Mausoleum of the Leader of the World Proletariat to pay him a tribute. Marching under red flags the column was headed by G. Zyuganov, the Chairman of the Central Committee of the Communist Party of the Russian Federation.

Presenting a commemorative speech he stressed that Vladimir Lenin had been, indeed, one of the most brilliant philosophers, scientists and strategists on Earth. 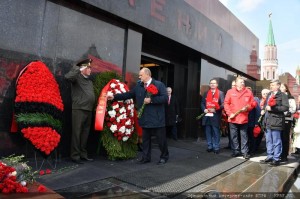 He laid down the basis and guidelines of bringing our country to socialism which had resulted in creation of the Union of Soviet Socialist Republics – the first socialist state in the world. The world had been changed forever.

Today, Lenin’s teachings are in demand more than ever as we witness great interest in Marxist-Leninist theory and practice throughout young generation. To meet modern requirements the CPRF has established an education center where it welcomes young communists and students from all over Russia and fraternal Parties.

Сommemorative events were held throughout the country. People pay their cordial tribute to the memory of the Great Revolutionary and Citizen of our country.

Long live the teaching of Lenin!!!