The 18th Party Congress of the Communist Party of the Russian Federation was held on April 24, 2021 in Moscow and attended by delegates from all CPRF regional, local and primary organizations.

The summary report to the Party Congress had been presented by the Chairman of the CPRF CC Gennady Zyuganov where he summed up the results of party activity for the reporting period and outlined the basic guidelines of the Party, they are:

1. To raise prestige of a CPRFmember for strengthening ideological discipline and cleansing the Party from indifferent and dissenting individuals.

2. Priority in this issue should be paid to information, propaganda and ideology in order to implement one of the most important tasks of the CPRF aimed at bringing the majority of proletarians out of political apathy.

3. To focus on doubling Party ranks and strengthening its class core. The share of young people under 30 now exceeds 12% and targeted efforts for further involvement of youth, creation of youth sections, councils of supporters, discussion platforms and other public structures will be very much helpful for getting the best results.

4. To protect the legacy of the Soviet era and promote socialist values along with protection of democratic rights and freedoms of citizens.

The CPRF will continue fighting for human rights, separation of powers, independence of the judiciary, freedom of speech, the right to assembly, the presumption of innocence, privacy, and the prohibition of censorship at all levels.

5. To strengthen parliamentary participation of the Party. The CPRF need to focus on preparing for the upcoming elections to the State Duma (autumn, 2021) in order to maximize a new composition of its faction. This is essential for efficient protection of worker’s rights and interests.

6. To continue development of relations with fraternal and left parties: all-round cooperation, exchange of views and coordination of positions on the main issues of international and intra-communist agenda.

To increase interaction with scientific centers in China, Vietnam, Cuba and other interested institutions, parties and comrades, welcoming the interest in the Leninist and Leninist-Stalinist theoretical legacy.

The participants of the Congress considered five issues on the agenda: 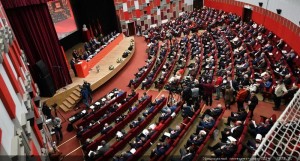 The Congress received about 80 messages of solidarity: from fraternal communist and worker’s parties and international public organizations.

On behalf of the Congress, official congratulations were sent to President of Cuba Miguel Diaz – Canel Bermudez, who was recently re-elected to the post of the First Secretary of the Communist Party of Cuba.

The Congress adopted resolutions and appeals:

Only struggle for justice and socialism against oligarchic state will lead to the goal. The CPRF stands firmly against cynical “Russophobia”, aggressive anti-Sovietism, nationalism and cosmopolitism.

International security mechanisms have been undermined. The threats of local conflicts, “cold” and “hot” wars are growing. To oppose the threats, the CPRF needs to give an adequate respond to challenges and move forward.

The CPRF declares its solidarity with the people of Ukraine, who is currently under rule of oligarchs and outspoken Nazis. The CPRF is confident that difficult times will be left behind and the historical destinies of Russia and Ukraine will be united.

At the second stage of the Congress the issues related to party participation in the elections to the State Duma, regional and local authorities will be discussed.

Congress related information will be published in Party mass media.

As a part of the Congress, the IstPlenum of the CPRF CC was held by the members of the Central Committee to consider organizational issues.

As the bottom line comrade Zyuganov called for coordinated and effective work to implement the missions facing the CPRF like preparation for the upcoming elections, active work with voters, propagation of the CPRF ideas, strengthening the parliamentary vertical and broadening of cooperation with friendly parties and organizations all over the world.