December 21 marks the 141st Anniversary of Stalin’s birth. The CPRF members and supporters across the country celebrated this date with festive events and of wreath- laying сceremonies dedicated to this great political leader.

It was Joseph Stalin, who actually developed and brought to life the great ideas of V. Lenin, the founder of the world’s first socialist state, inspired by works of K. Marx and F. Engels.

V.Lenin and J.Stalin managed to create a new economic policy, they created from scratch a five-million strong Red Army, in a very short time they arranged a new system of national education and great science.

J. Stalin managed to unite the Party after Lenin’s death,. Realizing the inevitability of the WWII , in 1931 he gathered the best scientists, engineers and workers in Moscow and appealed to the nation to restore the ruined economy in maximum 10 years in order to match the European countries. The people united, believed and succeeded.

After the collapse of the USSR, a lot of monuments to J.Stalin and V.Lenin have been destroyed. Attempts to re-estimate their role in the history of Russia are still on the way. However, the facts of history speak for themselves: thanks to Stalin’s genius the USSR managed to defeat Adolf Hitler, the most severe enemy in the history of mankind along with his ruthless and well-equipped army. 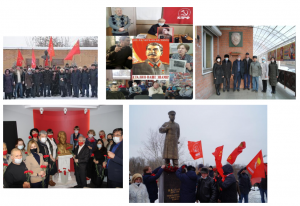 Today, the popularity of Stalin is growing up tremendously. Stalin is the personification of state justice for the working people of the largest state in the world, who tried to build new human relations without exploitation of man by man. His name remains the symbol of the greatest achievements and victories, an example of selfless devotion to the nation.

That is why the common people raise funds and open monuments to Stalin instead of those recently destroyed in Russia. Whenever you come to the monument of Stalin, you will always find a lot of flowers at it. This is a tribute to the Leader, who made our future possible.

The Communist Party of the Russian Federation proposed that our athletes, banned from competing under the national flag participate in the upcoming competitions under the banner of the Victory, inseparably linked with the name of Stalin.