The XI (October) Plenum of the Central Committee of the Communist party of the Russian Federation was held on October 24, 2020.

Together with the analysis of current situation and reports the Plenum considered the issues related to the Left Patriotic Popular Front as well as its creation and struggle for workers’ rights and national interests of  Russia.

Due to restrictions imposed by the spread of the coronavirus infection, the Plenum was held in a format of video conference. The Red Line TV channel of the CPRF provided a live broadcast of the meeting. Hence, Party members, activists and supporters of the left forces in Russia and all over the world were capable of  watching the broadcast.

Reports submitted by Party leaders have considered their voter education in view of   upcoming State Duma elections of 2021 about.

G. A. Zyuganov, the Chairman of the CPRF Central Committee made a closing speech with the analysis of the current situation in Russia against the background of growing Russophobia in the world.

He underlined that at present, our country is facing a number of external threats like  economic sanctions, military pressure, political provocations and information attacks. In a new type of war unleashed against Russia, transnational capital relies on a so-called “fifth column” inside the country. Russia’s allies are also under the blow. Globalists are cruelly mocking Ukraine. They are trying to undermine the situation in Belarus, Azerbaijan, Armenia and Kyrgyzstan. Shortly we may face new attempts to shake up political situation in Kazakhstan, Moldova and Pridnestrovie (Transnistria).

Currently Russia’s ruling circles do not provide an effective response to the growing challenges and threats. The government keeps on giving priority to benefits of the oligarchy totally ignoring the interests of common people.

The leader of the Communist Party emphasized the viciousness of the government’s draft Federal budget for 2021 and the upcoming “three-year period”. This document once again has revealed the essence of the ongoing socio-economic course which is liberal in ideology and destructive in its results. He also commented on the situation with the elections held in September 2020 and the necessity of unification of all progressive forces under the banner of a broad Popular Front.

He said that on a single voting day held on September 13, 2020, in the Russian Federation there were election campaigns of various levels. During these elections, the Communist Party was able to enlist support of new strata of voters because party’s program was considered as the program of popular interests. So, based on this program  the creation of a broad Popular Front based on the proletarian strata is quite essential.

The CPRF will maintain a class approach to the labor movement, to all employees and exploited workers. It requires an Alliance with those movements that protect the interests of the workers and other groups of the proletariat. And, of course, such an Alliance does not imply the erosion of the Communist party, but requires, as Lenin taught, a clear focus on the tasks of the Party.

In conclusion G. A. Zyuganov called on the Party activists to strengthen the propaganda of the Communist party’s program proposals, expand preparations for the State Duma elections, and work more widely to consolidate the forces of the Left – Patriotic Popular Front. 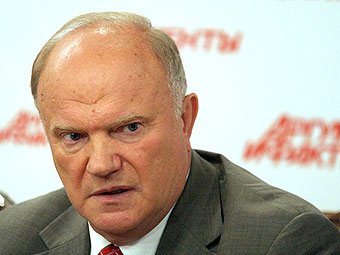