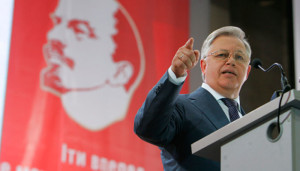 Witch Hunt in the Verkhovnaya Rada of Ukraine has become the main purpose of the National Fascists who sized the power. Intoxicated with the blood of their fellow countrymen and political opponents the deputies obedient to the junta are pressing buttons in extremist ecstasy, voting for the most obscurantist laws. Today, they banned the activities of the Communist Party of Ukraine. In the McCarthyism tradition the campaign is being unwound aimed at banning of the Communist Party, which has consistently advocated for peace in the country, against the increase in prices and tariffs, for the right of everyone to freedom of conscience, speech, speak their native language, the right to control their destiny in their own country.

We reiterate that a tragedy of the peoples in Europe started with banning of the German Communist Party, the Reichstag fire. The then Nazis have found followers in today’s Ukraine.

We appeal to all national-patriotic forces of our country, to foreign communist and leftist parties to raise their voices in defense of the Ukrainian comrades. Come out to the meetings; make protests in the country representative missions, your parliaments and governments. Call for human rights respect.

Fascism will not pass!