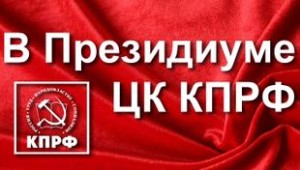 The Communist Party of the Russian Federation is following with alarm the tragedy unfolding in fraternal Ukraine. What happened there is a government coup. Violence has been used to smash the power system. The country is plunging into chaos.

The flame of the conflict in the home of our neighbors has been ignited by the heirs to the fascist underling Bandera at the instigation of the American special services and European politicians. The brown and orange plague has again approached Russia’s borders. The Supreme Rada has canceled the law that provided minimum guarantees for the use of the Russian language in the Russian-speaking regions of Ukraine.

The Banderovites have set about raping historical memory. Monuments to Soviet soldiers who died to liberate Ukraine from the fascist occupation are being destroyed everywhere. By bringing down the monuments to Lenin, the thugs are not only destroying the historical heritage, but are encroaching on the symbols of Ukrainian statehood because it was Lenin who had signed the Decree on the creation of the Ukrainian Republic.

Meanwhile one of the main causes of the grave crisis is the profound discontent of the people with the policy of Yanukovich who protected the interests of a handful of oligarchs, failed to rule the country properly and wimpishly surrendered power at a moment of peril. The ruling group was thinking only about its accounts in Western banks and offshore zones. This made the Ukrainian leadership particularly vulnerable to Western blackmail. The result of the spineless policy of the head of state was the paralysis of the law enforcement bodies and the betrayal of the political elite which failed to fulfill its obligations under the constitution.

Because the grassroots protest sentiments did not acquire a class character they were used in the clash between two clans of Big Business. The group that united pro-Western nationalist and extreme right-wing forces came out on top and used popular discontent in order to carry out a government coup. Ultra-nationalists are increasingly setting the country’s agenda. But in future they will inevitably pursue a still more anti-people policy paying for Western support by further cuts of public spending.

The coup has been carried out according to the American technology of pseudo-popular revolutions that has been tested in Yugoslavia, Georgia, Libya and in 2004 in Ukraine. The US does not hide the fact that in the ten years since Maidan-1 it invested billions of dollars in the support of anti-Russian forces. Well-trained units of fighters were used on Maidan-2.

The aim of political and social terror against the majority of the people is to prevent the revival of the centuries-long union of Russia, Ukraine, Byelorussia and other countries that used to be part of a single state. There are plans to install a pro-Western president amid the chaos reigning in the country. There is no doubt that in the context of growing moral and physical terror any early elections will be rigged.

The dragging of Ukraine into the European Union means that it would cease to be a neutral state. The Russian navy would be squeezed out of the Crimea. American missiles would be stationed on the borders of our country. The main task of the foreign string-pullers is not to make Ukraine prosperous and democratic, but to grab its markets and harness it to the NATO chariot, like Georgia and the Baltic countries. Such a policy will inevitably bring about a collapse of Ukraine’s economy and a flow of refugees to Russia.

In the face of blatant Western interference in the internal affairs of Ukraine Russia cannot dispassionately watch a neo-Nazi, Russophobic and anti-Semitic regime being formed on its borders. The Russian leadership has everything that is necessary to stop Ukraine sliding into a civil war and anti-people dictatorship. Unless these opportunities are used the responsibility for the tragedy in Ukraine will rest with the Russian authorities.

The CPRF believes that Russia cannot recognize as legitimate the group which has usurped power in Ukraine as a result of a bloody coup. The Russian Federation must not recognize the legitimacy of any future decisions of the forces that have seized power, including the laws passed under duress by the Supreme Rada. Russia has firmly supported the legitimate power in Syria. It should be equally firm with regard to the events in Ukraine.

We call for an urgent enlarged meeting of the Russian Security Council to be attended by the leaders of parliamentary parties to work out a package of political, economic and other measures to protect the interests of our state. In particular, we should ensure guarantees of the rights of Russian citizens and the Russian-speaking population of Ukraine and prevent discrimination against the Russian language in that country.

We urge the Russian President to make an official statement on the situation in Ukraine and to issue a warning that the Russian side reserves the right to freedom of action in defense of its interests. There are ample grounds for condemning the international mediators who have provided a political cover for the government coup.

What is needed is a balanced and realistic approach to the issue of granting financial aid to Ukraine. It is necessary to envisage trade-economic and other sanctions against the groups of oligarchs who contributed to the violent change of power in Kiev.

Russia must support popular resistance and self-organization of the masses in protecting their personal and social security in some south-eastern regions, especially in the Crimea and Sebastopol. If the popular movement there is allowed to be crushed, that would inflict irreparable damage on Russia’s interests and reputation.

Because the key media in Ukraine have fallen into the hands of the pro-Western forces the Russian media should do more to bring to the people of the fraternal state an objective picture of events, the true intentions of the forces that have seized power and the long-term consequences of their actions. It is extremely important to highlight the facts of direct involvement of the Western politicians and special services in organizing the coup in Ukraine.

The situation calls for vigorous support of the political forces, non-governmental groups that come out in defense of the historical friendship between our peoples. A green light should be given to all the initiatives aimed at supporting our fellow countrymen in Ukraine, initiatives of the Russian regions aimed at strengthening bilateral cooperation.

We must alleviate the lot of the political refugees from Ukraine, its politicians and public figures and members of the law enforcement bodies who would seek refuge in Russia from persecution by extremists.

Russia must resolutely condemn the sweeping removal of the monuments to the liberator warriors who vanquished the fascist plague, the magnificent monuments to our common history.

If the Russian leadership fails to react to the events in Ukraine or shows a lack of will it will become the next victim. The West is already preparing forces and means for that and a “fifth column” has already been formed inside Russia.

We call on all the responsible patriotic forces of Russia to unite and show solidarity with the fraternal people of Ukraine.