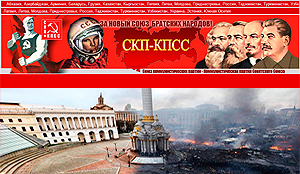 Today the representatives of the so-called “right sector” and in fact fascists and barbarians, who can hardly be identified as civilized human beings, committed a crime, that gives a clear understanding what kind of forces Ukraine faces in these tragic times nowadays. Subhumans, striving for the interests which are alein to the interests and values of the people, who are reactioners and agent provocateurs, dashed into the Communist Party of Ukraine headquarters in broad daylight. Breaking all the legal and moral standards they crushed and looted tht property of the most mature and wise party, which has the highest authority in the country.

There are no doubts that so called “Euoropean values” and “libaral democracy” so much spoken about and proclaimed by the participants of the street disturbances are just a flamboyant and attractive for some people phrase which hides vandalism, banditism, loss of statehood and sovereignty of Ukraine.

European and overseas secret survices step by step move towards the aim which they cherish and keep in their minds – to the elimination of the country and enslaving its citisens. We are convinced that any citisen of Ukrain who appeases the predatory appetites of the western monster, who servers him and his jackals is a collaborationist and an enemy of the Ukranian people!

Offspings of Bandera and Shukhevitch, who exult around the demolished monuments to Lenin who’s name is so frightful for all kinds of bastards and swindlers will get what they deserve. Plug ugly raid on the headquarters of the Communist Party of Ukraine and elimination of the monuments to the leader of the world proletariat in some areas of Ukraine are definetly the links of the same chain. Satelites of the world capital are dripping with poisonous saliva, but a day will come when we will restore the monuments to comrade Lenin and the historical justice!

We demand that the leadership of Ukraine, the Minisrty of Internal affairs should immediately punish the criminals and restore the Constitutional order.
We express our protest against the American and Western intrusion into the internal affairs of the independent state.
We call upon patriots to close the ranks around progressive forces of Ukraine and protect the values which our farthers and grandfarthers poured with their sweat and blood protecting them from external enemies. Saving the great country from looting by foreign vultures is only in the hands of the Ukranians themselves.

Rise up, Ukraine, against your own Judahs and executioners!
Your glory and your will haven’t perished and are still alive!
Keep going! Struggle! We are by your side!