The COVID-19 pandemic has affected many areas of life in Russia. One of the most sensitive issues related to it is a transfer of all students in our country to online education. The “lock down” of schools occurred in April and still remains in use. Parents are scared with prospective to have this situation officially legalized shortly. Throughout the country it caused an enormous public resonance.

On the initiative of the Communist Party of the Russian Federation, series of meetings, conferences and other protests are taking place throughout the country. All forms of protest are used by the parent community, teachers, students to express their disagreement what they are forcefully imposed with, ignoring the opinion of the majority. This is completely against the best traditions of Russian educational system. 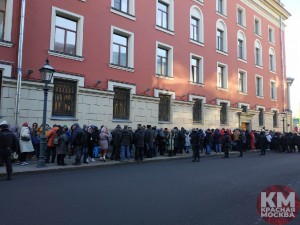 Children are deprived of their natural right for free education, guaranteed by the Constitution of the Russian Federation and parents have to fight for the right of their children to go to school as staying out of school for such a long time is very harmful for their mental and physical health. All social and communicational links are being broken.

Besides, many families simply do not have appropriate conditions for online education. If a family has several school-age children and only one computer, it is impossible to get online lessons for each kid at the same time. Moreover training programs are not designed for students with different level of knowledge. In rural areas, a lot of families do not have PCs at all. There is no good Internet either. Hence online education leads to social degradation followed by a social explosion.

In this situation CPRF parliamentarians of all levels, party members, activists and supporters organize protest actions against further prolongation of online education for children in Russia, opposing an attempt of the “United Russia” to push through a Law legitimizing online education on a permanent basis.

Last week the CPRF initiated parliamentary hearings in the State Parliament on the topic: “Online education: pros and cons.”

The “round table” was chaired by G. Zyuganov, CPRF CC Chairman, Head of the CPRF Faction in the State Duma with participation of State Duma deputies, representatives of parent and pedagogical communities, and the executive branch.

He stated that all victories of our country over the past 100 years were primarily related to high-quality education. After coming to power the second important mission of Bolsheviks was to create a special Commission to combat illiteracy. The unique task has been implemented within a few years. All citizens received an excellent education. And we faced the tragic of 1941 year as one of the most educated country, with the best machine Park and the most competent officers and men. Ultimately, education became the key for the Victory in 1945.

This week the CPRF keeps on protesting. The Parliamentarians went to the President Administration to submit the petition against online education signed by thousands of parents and teachers to the President.

The Communist Party of the Russian Federation has managed to cause a wide public response with its various and continuous protest actions and forced the country’s leadership to finally pay attention to this problem.

The CPRF will continue fighting in favor of our children and their parents, for our rights stated in the Constitution and for our future!

We are glad, that common people know that the CPRF will always help them!