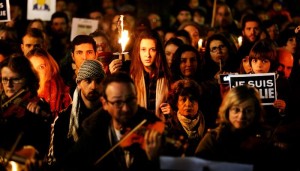 Statement by the CPRF Central Committee
in [Español and English]

Europe is in shock over the terrorist attacks in Paris which claimed 17 lives. This is witnessed by the mass marches in the cities in France and other countries on the continent in which millions of people took part. The CPRF resolutely condemns the violence, especially when its victims are civilians, and expresses its condolences to the families and close ones of the victims.

At the same time it is incumbent upon us to see the deep roots of the current wave of bloody violence in France. To counter the growing influence of the USSR, the CIA began to use international terrorism back in the 1980s. At the time the extremists from all over the Middle East were assembled and armed in order to topple the government of Afghanistan. NATO interventions in Iraq and Libya and the murder of their leaders, Saddam Hussein and Muammar Qaddafi, who actively opposed Islamic radicalism, provided fertile soil for the growth of terrorism. In Syria gangs of terrorists recruited from all over the world are openly acting as auxiliary forces to NATO in an attempt to remove Bashar Assad’s government from power. This policy led to the creation of the terrorist Islamic State of Iraq and Levant (ISIL). Meanwhile the gangrene of terrorism has grown and spilled over into Europe aggravating the chaos in international relations.

Who benefits from the chaos? There are grounds for the opinion that the USA stands most to gain from destabilization of the world situation. It was the Americans who plunged Europe into the Balkans war in the 1990s. Washington was actively encouraging the Arab Spring in the Middle East and North Africa. As a result, secular regimes in Tunisia and Egypt were replaced by Islamic radicals. It was the USA that used arm-twisting methods to force France, Germany and other NATO countries to take part in the Libyan and Syrian adventures. It is the mastermind behind the current tragedy in Ukraine. Washington is seeking to set Europe against Russia, a confrontation that is extremely harmful for both sides.

The USA is consistently seeking to weaken its European rivals by diminishing their economic potentials and forcing them to increase their military spending under the pretext of combating world terrorism. The terrorist threat in Europe, as manifested in France, may provoke capital flight from the European Union. Again, NATO’s Trans-Atlantic partners will be on the winning side.

Europe has quite legitimately expressed its solidarity with the victims of the terrorist attacks in Paris. At the same time there are signs of double standards in the behavior of European Union officials. The EU has not only de facto supported the rise of Islamic extremism, but is shutting its eyes to the mounting tide of fascist sentiments in Ukraine. For many years Europe has ignored the marches of the remnants of fascist militants in the Baltic states. Today it is ignoring Nazi fascist marches in Kiev.

It is with the consent and support of the USA and the EU that the oligarchs following in the footsteps of Bandera who have seized power in Kiev unleashed genocide of the people of Novorossiya. During the course of the “anti-terrorist operation” nearly 5,000 women, children and old people died. However, the months of slaughter caused by the Ukrainian neo-Nazis have not provoked any angry reaction from the “respectable” Europeans. Europe has not initiated international peace marches in Kiev in response for the bloodshed in Donbass. It pretends that nothing is happening.

Moreover, Europe’s diplomats at the UN blocked the Russian proposals to condemn the military crimes of the ruling group in Ukraine. And yet their atrocities are no less appalling than those of the ISIL militants. Suffice it to mention the massacre in Odessa where tens of people were burned alive and those who managed to escape the raging flames were brutally finished off.

Today the double standards in Europe’s behavior are becoming more apparent. It is becoming ever more difficult for it to hold the moral high ground. The situation inside the European community is worsening. The collapse of traditional principles, family and cultural-spiritual values is taking its toll. Finally, the neo-colonialist policy of the USA and the European Union is making a special contribution to the spread of political extremism on the planet. This policy spells poverty for tens of million of people on all the continents. Despair and wrath push these people into the arms of religious fanatics and out-and-out bandits. In resolutely condemning the acts of terror and expressing condolences to the families of the dead, the CPRF declares that the key task of humankind is to eliminate the underlying causes that generate violence and chaos. To rid the world of these phenomena it is necessary to put an end to the cynical policy of “US exclusiveness.” In order to achieve their global goals the imperialist circles in that country are cooperating with terrorists and flouting all international legal norms. Having become the military-political center of the capitalist world, Washington is the main force that thwarts the aspiration of the peoples for social justice. The USA has turned into a policeman to the world that supports the most reactionary forces, including neo-Fascists.

It is sad and tragic that all this is happening in the year of the 70th anniversary of the Victory over Fascism and that Europe is beginning to forget the lessons of the most horrible war in human history. Today once again might is right in international relations. We must resolutely oppose the attempts to revise the results of the Second World War and violations of the UN Charter. Russia is constantly facing terrorist threats encouraged from outside. That is why the Russian ruling circles must at long last abandon the dream of becoming an equal partner of the West. Our country has no future in the framework of global capitalism. Russia should stop copying the rotten model and embark on a fundamentally new path of social and economic development. Only by remembering the lessons of history and taking on board all the best from our great past can we make our country strong and prosperous, independent and secure. The triumph of the values of social justice, friendship of the peoples, genuine democracy and real protection of human rights – this will make our world a better, cleaner and safer place.