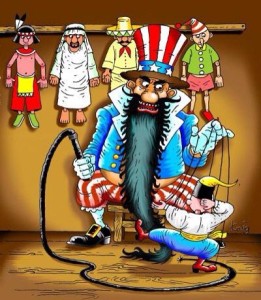 [...]
Prosecution of communists is one of the most evident signs of brewing fascism. There is nothing spontaneous in what is happening in Ukraine. These processes are ruled by experienced puppet masters who gained their skills in arranging overthrows in Yugoslavia, Georgia, Libya, the counties of Asia, the Middle East, Africa and Latin America.

Western politicians and diplomats openly conduct the acts of bashing in Ukraine as if it were not a sovereign state, but one of their colonies. Active are instigators and agent-provocateurs from Poland and Baltic states. Interference into the internal affairs of Ukraine is now harsh and unprecedented. Any attempt to bring things in order result in accusations of excessive violence, blackmail and in threats to use sanctions.

The technology how to grab power is the same as in 2004 – by chaos in the streets and violence. But the present Ukrainian “highest ranks” turned out to be unable to draw a lesson from history. Lack of actions on the part of the power equates to appeasing those who aim at engaging Ukraine into a civil war and drag it into and enslaving dependence from the European Union. We cannot ignore the most dangerous trend of strengthening manifestations of fascism in Europe.

We condemn resolutely the creeping attempt of a coup d’état in Ukraine. We call on all the left, patriotic and anti-fascist forces to raise their voices against the attempts of fascist elements to capture power in Ukraine.

We express our solidarity and support to the communists of Ukraine!