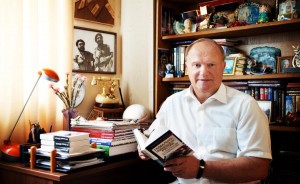 The Leap Year of the Dragon: Russia Prepares to Resist Plunder

The leap year 2012 is receding into history. The year of the Black Dragon saw the worsening of Russia’s existing problems and brought many new problems. The country’s life during this period was marked by a tough confrontation between two trends. On the one hand, the majority of the Russian people were increasingly wanting to throw off their necks the multitude of parasites who were robbing them and bring about a turn for the better. On the other hand, the current “masters of Russia” went out of their way to continue milking the authorities. The contest of these two trends determined the social and political situation.

The past year could be described as the year of testing the strength. The tone was set by the Duma elections which saw the CPRF make a great leap forward. The party won 19.2% of the votes, according to official data. That result was achieved despite the brazen stealing of votes from the opposition, widespread fraud and extremely aggressive behavior of the “vertical power structure”. Considering all that, experts estimate that at least 25-27% support our party. Gleeful prophecies that CPRF was fading away from the country’s political arena have not come true. On the contrary, the party has managed to establish a new bridgehead for further struggle. The same trend was observed in Ukraine where the Communist Party dramatically increased its support in elections for the Supreme Rada.

In Russia things were not limited to electoral shifts. The protesting masses took to the streets. The protest acquired a scale unheard of since the time eight years ago when people protested against “cash for benefits” reform. This time around the protests took place under the slogans of no confidence in the authorities. For the first time in many years the Russian “elite” became aware that the ground under its feet was becoming patently shaky.

To lure the protest into a dead end the authorities deployed the “secret reserve”. The “shadows of the 1990s”  — aged but still aggressive representatives of the liberal froth of a quarter century ago — were being infiltrated into the protest movement. The pseudo-opposition noise they created gave the authorities a pretext for putting on a spectacle of “fighting pro-American subversive forces”. The groundswell of protest was in many ways disoriented, compromised and crushed…

In this way the powers that be managed to keep the situation under control and hold the presidential campaign according to their own templates. True, to achieve its goal the top leaders had to distance themselves from their own strike force. Entering the presidential campaign, Vladimir Putin did not only shed his “title” as United Russia candidate, but set about building a standby “political platform” in the shape of the Popular Front.

However, all the signs are that the maneuvres carried out by the authorities were of little avail. How could they be, considering the openly pro-oligarchy policy? The government’s economic course is highlighted by its programme of privatisation. Even in times of crisis the juiciest pieces of the people’s wealth continued to be handed out to the “fat cats”. The social policy sealed in the articles of the federal budget is nothing if not cynical.

Against this background whatever positive ideas people had of the current authorities continue to fade away. Even the exposure of massive fraud at the Defense Ministry did not provide the ruling team with an anti-corruption aura. Mr Serdyukov had been a reliable part of the ruling team for too long and too obviously, being regarded as an “efficient minister”.

Under the circumstances it has become clear that a new shift to the left in public sentiments was inevitable and the authorities would hardly be able to prevent it. At that point the vestiges of democracy in the country were sacrificed. United Russia had the State Duma rubberstamp a whole series of undemocratic and even punitive laws. A range of tricks reminiscent of the worst kind of legal and political shenanigans was pressed into service.

The first trick is the technology of “managed chaos”. Dozens and potentially hundreds of hastily cobbled together micro-parties are being thrown into the political arena. That operation litters the political forestage. Misleading considerable sections of the electorate, that step opened a new season when the authorities tried to fish for political dividends in troubled waters.

The second trick is the “bureaucratic sieve” of gubernatorial elections. The procedure of gathering signatures of municipal deputies to promote candidates for governor was introduced. This provided the local bureaucratic elites with a special sieve which they used to allow some people, but not others to take part in the election campaign.

The third trick was the “individual terror” strategy. Special steps were taken to intimidate the deputies by threatening to strip them of their mandates if they challenged the authorities.

The fourth trick may be called “no assemblies of more than three people”. Measures were introduced in the laws on mass events that envisaged tough and sometimes punitive sanctions against those who take part in protest actions.

The fifth trick is “to give no breathing space”. It has been decided to hold a single voting day in September. This is the time when most people are on holiday or at their dachas. It is the time when people are furthest removed from political affairs.

Along with all these gimmicks the idea has been smuggled in of another reform of the electoral system. There is talk of recreating majority constituencies in parliamentary elections. Yet it is no secret that elections in such constituencies fling the doors open for all kinds of scum: the new rich, corrupt officials and out-and-out criminals. In this situation any “Kushchevka” guarantees the issue of parliamentary mandates to all sorts of crooks.

Meanwhile in 2012 Russia continued to lose what it was once rightly proud of. A vivid illustration was the summer Olympic Games. In spite of the efforts of our athletes, the country dropped to not a very distinguished fourth place. If the Soviet Union existed we might still be the first. The former republics of the USSR combined won more gold, silver and bronze medals in 2012 than any other single country. The improving Olympic results of China, against the background of the Russian “sag”, are one more reminder of the fact that a weak country cannot have strong sports.

The Soviet Union ensured mass sports training of children and young people simultaneously with developing the system of general and higher education. But in today’s Russia education comes under repeated blows from the “reformers”. Another attack on higher education was launched in connection with the “monitoring” of education institutions to reveal “inefficient” institutions. Decisions to the effect were passed shortly after the presidential election. Education and Science Minister Dmitry Livanov readily assumed the role of butcher. In response at the tail end of the year the students of the Russian State Trade and Economic University staged vigorous actins for the preservation of their university. However, the federal budget adopted for the next three years dramatically cuts the financing of schools.

The sphere of culture fares no better. The authorities have been sticking the label of “inefficient” on specific, sometimes famous institutions. In Moscow alone the end of the year has seen scandals over the “reformatting” of the Gogol Theatre and the Mayakovsky Museum.

The municipal elections held in October have shown that people react to the tricks of the rulers by “voting with their feet”. Turnout at the polls dropped to 20-25%. The country has declared a tacit, but obvious boycott of the authorities. In this situation the ruling circles cannot feel that their position is secure.

The social-economic and political processes are giving added relevance to the CPRF programme. The Communist Party of Russia is confidently upholding its position. Our arguments are the results of the voting during the People’s Referendum and are cast in specific draft laws. These arguments are recorded in the resolutions of hundreds of rallies all over the country and in the decisions of the All-Russia Congress of Representatives of Work Collectives and have been supported by the founding congress of the Russky Lad movement. The key events of party life in the outgoing year were the plenary meetings of the Central Committee devoted to the work of primary CPRF organizations and to our ideological and theoretical activities.

The work that has been accomplished warrants the conclusion that the party and its allies have chosen the right course. This is the only course that can take Russia out of its deep crisis. As we mark the 20th anniversary of the restoration of the CPRF we are ready for our 15th Congress. I am sure that it will lay down valid guidelines for our activity in the next four-year period.