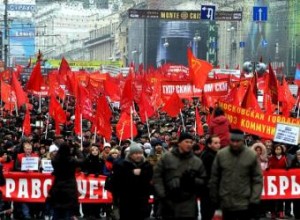 It is 95 years since the Great October Socialist Revolution. It has been and remains the main event in recent world history. The global significance of the October Revolution lies in the fact that it ushered in an era of socialism delivering real and indisputable results for the working people who took state power in their hands in the form of the Soviets of Workers’ and Peasants’ Deputies. The dictatorship of capital was replaced with genuine rule of the people on the basis of social ownership of the main means of production.