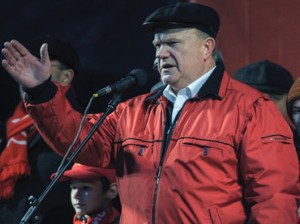 
On November 7, the 95th anniversary of the Great October Socialist Revolution, the popular Russian newspaperArgumenty i Facty devoted the whole of its first page and a spread to the topic: “1917:A Breakthrough or Downfall of the Country?”
Among other materials the paper carried the column contributed by Ivan Melnikov, First Deputy Chairman of the CC CPRF, entitled “October is Forever. A new era for Russia and the whole mankind was ushered in 95 years ago.” The issue had a circulation of 2.5 million copies. Below, the text of the column.
“On November 7, 1917  (New Style) the anger of an oppressed people pent up for centuries erupted into the open. Even Lenin, shortly before the Revolution, was not sure that it would happen so soon. It could be prodded on, it could be organized, but it could not be planned because its driving force was the overall mood. That the Revolution had to happen is not open to doubt.
The Revolution gave Russia and the world not only a new state. It produced a new attitude to every individual, an attitude towards a person entitled to a decent life. The marking of that date in our times has less and les nostalgia about it. Revolution Day is coming to be seen as a day of struggle, a struggle against attempts to put a yoke on society, to turn the people into an udder that can be milked and milked for the prosperity of a few.
The wake-up call that changed the perception of that date came during the acute phase of the economic crisis when Marx’s Capital was swept off the bookshelves all over the world. The date of November 7 is acquiring new meaning against the backdrop of the deep crisis of capitalist relations. This is one of the reasons for the popularity of Lenin and Stalin. Our opponents portray them in a one-sided way stressing only the negatives. But they were creative politicians and builders.  They lived in hard times. Society was very complicated. But they laid the foundation of what we now call the Soviet civilization which had the highest level of education, science and culture. Where man conquered space and the atom. Where a new quality of morality, new meanings of life were forged that make the present “buy-and-sell” consumer society pale by comparison.