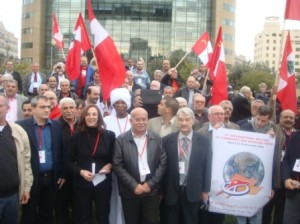 First of all, on behalf of the CPRF I would like to convey sincere greetings to the Communist Party of Lebanon and the people of Lebanon. Please accept, dear friends, our greetings on the occasion of the 88th anniversary of your party which you marked recently.

We greet the delegates to this 14th International Meeting of Communist and Workers’ Parties.

Comrades, November 7 this year saw the 95th anniversary of the Great October Socialist Revolution. The ideas of the October Revolution continue to inspire us, Russian Communists, in the fight for the rights of the working people, for socialism.

It has been and remains the main event in recent world history. The global significance of the October Revolution lies in the fact that it ushered in an era of socialism delivering real and indisputable results for the working people who took state power in their hands in the form of the Soviets of Workers’ and Peasants’ Deputies. The dictatorship of capital was replaced with genuine rule of the people on the basis of social ownership of the main means of production.

In contemporary Russia, the Great October Socialist Revolution and its historic significance are the subject of heated ideological and class struggle. Liberals of every stripe, and the scientists who are in their service, the media seek to represent the Great October Revolution as a misfortune for our country. The CPRF uses every form of struggle to oppose those who denigrate the world-important event that was the October Revolution.

I would like to tell you, dear comrades, that this date was marked on a wide scale in Russia. Demonstrations, rallies and pickets organized by the CPRF took place all over the country. I declare with all responsibility that there was not a single city in our country where the CPRF and its supporters did not take to the streets and did not declare their adherence to the ideas of the October Revolution and their readiness to fight for socialism. You can see the scale of actions in connection with the 95th anniversary of the October Revolution if you imagine the map of Russia: they were organized on the whole space from Yakutsk to Kaliningrad. In Leningrad, the city of three revolutions, a restored monument to Lenin by the well-known Soviet sculptor Tomsky was unveiled. The authorities had dismantled it and removed from the place where it had been installed during the Soviet period. However, under the pressure of the CPRF and its Leningrad city organization they had to defer to the Communists’ demand.

We are grateful to the parties which have signed a joint Statement in connection with the 95th anniversary of the Great October Revolution proposed by the CPRF. We hope that those who have not yet signed it will be able to do so today, and this would be an act of solidarity with the struggles of the CPRF. We need your solidarity. We need solidarity with the CPRF members who are being persecuted, against whom criminal cases are opened only because they take part in protest actions. Let me stress that we are talking about CPRF members, and even secretaries of some regional organizations.

Comrades, in recent years, at 13 previous meetings we have constantly turned to the topic of the struggle against imperialism, for the rights of working people and for socialism. Joint documents adopted by previous meetings provide an analysis of the causes of the world economic crisis. In their speeches the participants spoke about the forms of struggle in their countries, which is undoubtedly extremely important for all of us.

We witness the heroic struggle of the communists of Greece, Portugal, Spain and other countries against the attempts of the ruling classes to shift the brunt of the crisis on the popular masses, above all the working class. Unprecedented actions by the working people met with resistance of the right-wing forces which, in spite of the contradictions among them, have untied to uphold their interests. We must analyze why powerful anti-capitalist actions have not yielded the results that could have been expected.

Comrades, in Russia, the financial and economic crisis has its national features. The liberal economic policy of the 1990s was destructive for Russia, as a result of which the country’s economy is sustained exclusively by the export of hydrocarbons and to a lesser extent of timber and metals. In the last fifteen years the world prices of hydrocarbons have hovered at a very high level. They are on average 15 times higher than in the mid-1990s. That is why the decline of production does not affect the state budget so much. However, addiction to oil and gas has done a disservice to the Russian people. Because of  the forced shift to a one-sided economy the level of national security has gone down dramatically.

During the twenty years of the rule of the international oligarchy that resulted in intensive penetration of international capital into Russia, cardinal changes have taken place in the social and economic spheres. It can be said that deindustrialization has practically been completed in Russia. Industrial giants of car-making and machine-building that underpin the economy of any industrialized state have been destroyed. Aviation building, agricultural machine-building, the food, textile and light industries are in decline. The integrated power grid and collective agriculture have been destroyed.

All these structural changes were bound to affect the conditions of the work of our party.

With the destruction of major production facilities, the workers’ movement is becoming disunited. In the period since 1995 the number of workers in our ranks dropped dramatically. Many have mingled with the declassee mass of working people who are fighting single-handed for survival making do with odd jobs in unskilled workplaces. Along with the destruction of major work collectives, trade unions have lost much of their significance having for the most part become an appendage of an unjustifiably bloated bureaucratic apparatus.

The onset of a systemic world crisis of capitalism deepened the atmosphere of discontent in all the social strata, causing a dramatic increase of mistrust in the declared course of state reform and in turn forced the government to take some unpopular measures. Realizing that it is impossible for an economy to exist on oil revenues alone for a long time, the ruling oligarchy in recent years launched a massive offensive against the rights that Russians have come to take for granted.

Thus, the constitutional right to free education and medical service has been practically dropped. The number of educational establishments of all levels has dropped sharply, and schools and polyclinics are being forced to practically shift for themselves. The communists in the State Duma have introduced an alternative draft for reforming the education system. Its key difference from the United Russia plan is guaranteed level of state financing of the general education schools to the full extent.

I would like to note that in the face of the onset of a systemic crisis of capitalism, the Communist Party of the Russian Federation is very active in exposing the essence of that phenomenon, explaining why the country’s leadership, in the context of market relations, is unable to resolve the main contradictions between the interests of hired workers and the greed of capitalists whose only passion has for centuries been to gain super-profits by oppressing the working people.

Socialism is undoubtedly the only system that is capable of resolving the contradictions because it can ensure effective state regulation of the socio-economic processes, restore the devastated economy and protect the interests of hired workers.

At all the previous meetings we have invariably reaffirmed our solidarity with the struggling peoples, against the numerous manifestations of anti-Communism on the part of world capital, against attacks on the Communist and Workers’ Parties.

Today we must reaffirm our solidarity with the Palestinian people who are fighting for their independence; with Syria, which is repelling an aggressive imperialist conspiracy.