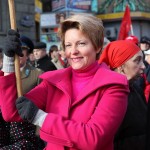 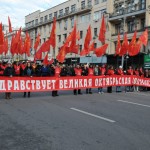 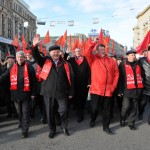 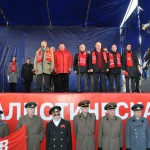 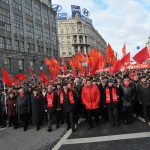 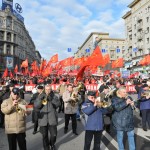 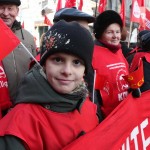 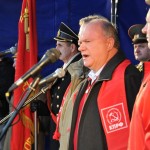 The 93-d anniversary of the Great October Socialist Revolution has been widely celebrated by mass rallies and demonstrations throughout Russia from Vladivostok to Kaliningrad. Hundreds of thousands of people took to the streets under the slogans: “Lenin! Stalin! Victory!”, “Long live the Great October!”, “For the friendship of peoples and the solidarity of the working people!”, “Long live the socialist revolution!”

In Moscow at least 50 thousand participants took part in the rally, which was addressed by the head of the party Gennady Zuganov. He said that the ideas of freedom, friendship, fraternity and justice as well as the respect to the Man of Labor again knock at all doors. This happens on the background of unprecedented crisis of capitalism which broke out in its citadel – the Wall Street. And today more than 200 countries are being tormented by it. The CPRF leader reminded that the two previous crises resulted in two world wars which brought about incredible trouble. But we must remember and be proud of the fact that it was under the Red Banner of the Great October that we managed to overcome the consequences of those crises. In his address G.Zuganov gave a comprehensive analysis of the dangers posed by the irresponsible policy by the present powers-that-be.
‘In the 20-th century our party 3 times pulled out our country from the ordeal – he said – and in the 21st century communists under the banner of the Great October and the Great Victory are ready to ensure the new breakthrough to the future!”