END_OF_DOCUMENT_TOKEN_TO_BE_REPLACED

Comrades, a congress is always a milestone event in the life of the Party. It is a review of troops and of the results of the work accomplished. It sets the tasks for the near term and for the longer perspective. It provides new benchmarks of theoretical, political and organizational activities. It is a powerful impetus for more active work of the whole Party and every individual member. It is a challenge to the political opponents, an address to friends and allies, to the country and the world with our vision of the problems and the ways to solve them.

END_OF_DOCUMENT_TOKEN_TO_BE_REPLACED 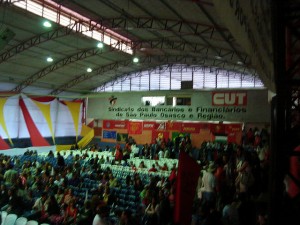 International Meeting of Communist and Worker’s Parties,
Sao Paolo, November, 21-23, 2008
Russia will return to Socialism
By Viacheslav (Slava) Tetekin
Member of the Central Committee,
Communist Party of the Russian Federation
Dear Comrades,
I am happy to be in Brazil – the country where the Left forces after many years of hard struggle gained enough power to start reversing centuries-old patterns of injustice and social deprivation.
When I am thinking of the role of our host country in global affairs I am recalling that the most successful trade union project in Russia – an increasingly  powerful union of automobile workers – developed under direct influence of Brazilian trade unions. This is positive case of globalization or rather display of international workers’ solidarity.
END_OF_DOCUMENT_TOKEN_TO_BE_REPLACED